We are very happy to announce that the team UFSC, Federal University of Santa Catarina, Brazil won the contest again. The agents of

scored 36 points and did not loose one simulation! On second place is (as in the last two years) the group of Jørgen Villadsen, TU Denmark, with the team GOAL-DTU.

Here is the ranking:

And the matches in detail:

that can serve as milestones for testing multi-agent programming languages, platforms and tools. We also expect that participating at the contest helps to debug existing systems and to identify their weak and strong aspects.

The performance of a particular system will be determined in a series of games where the systems compete against each other. While winning the competition is not the main point, we hope it will shed light on the applicability of certain frameworks to particular domains. 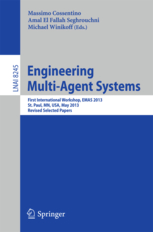 The Engineering Multi-Agent Systems 2013 (EMAS) proceedings will be published in the next days. The book contains also all papers about the Multi-Agent Programming Contest 2013:

Did you know the overview page of EMAS already?